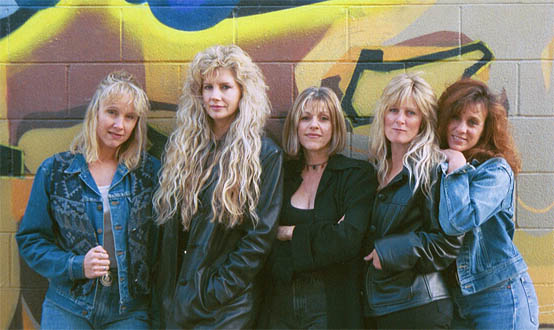 You're probably wondering (most people do) where we came up with a name like "Drawing Down The Moon". Well, it definitely wasn't easy! Come to think of it, getting a group of opinionated women to agree on anything isn't easy. As it turns out, Drawing Down the Moon is an ancient Celtic ritual of female empowerment.

Our band Drawing Down The Moon is kind of a ritual of our own: Five talented women gathering together for the type of empowerment that only good music and friendship can bring.

Jan is most recognized for the extensive credits accumulated as the founding member/ guitar babe of Vixen, the all-female international rock sensation of the late eighties and nineties. Within Drawing Down The Moon, she is most recognized for her innovative songwriting, strong backing vocals and artful guitar styling.

the molecular biologist (singer/songwriter/scientist) has been the founder/front woman of Imaginary Friends, Stacy Robin and the NYL and Chrome Zone and percussionist for Home Brew and for Cindy Alexander. Her diverse vocal credits range from concert choir performances to movie sound tracks.

This singer/songwriter/attorney fronted local LA band Kensington Park before hitting the Los Angeles club scene as a solo artist. After a stint in the courtroom, she enjoys performing in venues where no one shouts "objection"!

Though accomplished on several instruments, Donna primarily plays drums for Drawing Down The Moon. She has studied under Tony Braunagel (Bonnie Raitt, Ricki Lee Jones) and has played drums (and bass) for a number of groups in Los Angeles and Ventura Counties.

The sultry voice over artist of Robinsons-May, Clinique and Citizen Ruth fame has toured the world fronting Trial By Fire and The Donna Rawlins Band. She is also a gifted songwriter, and has had music featured on film and TV, including the season finale of Melrose Place.


( Christine Perior - We first knew of Christine as a bass player with Martha Davis of the Motels. Although her participation has only been as a player for live performances, she has become a good friend and source of great strength in our shows.)